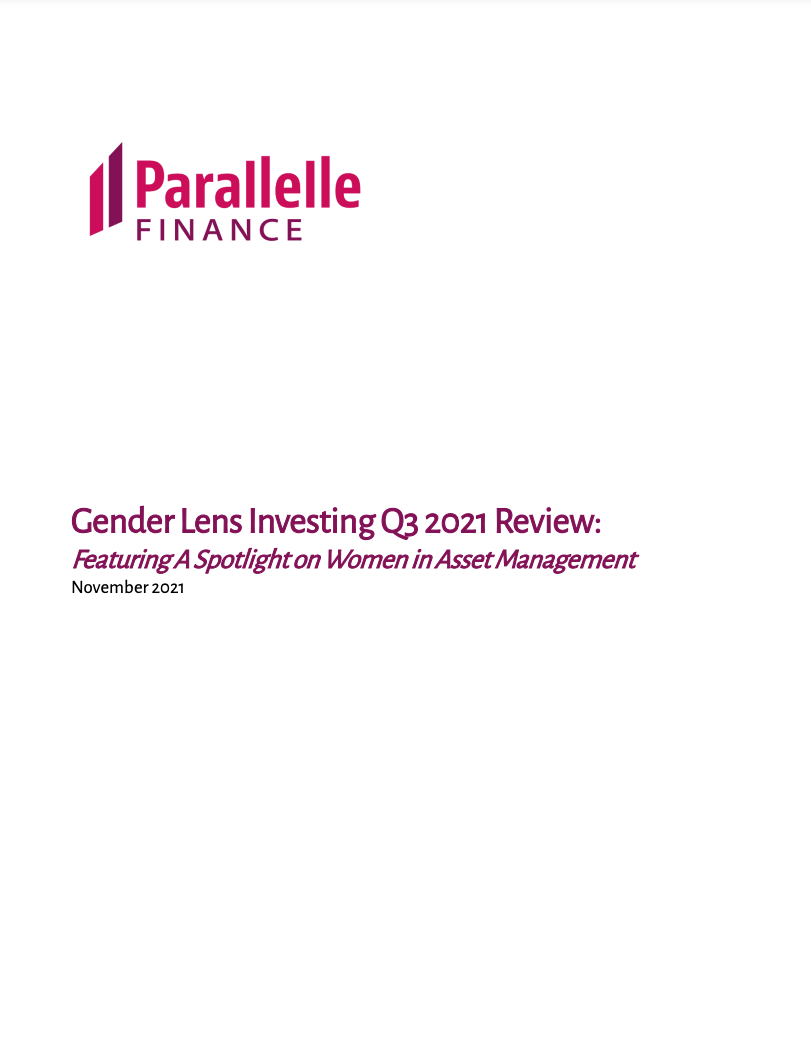 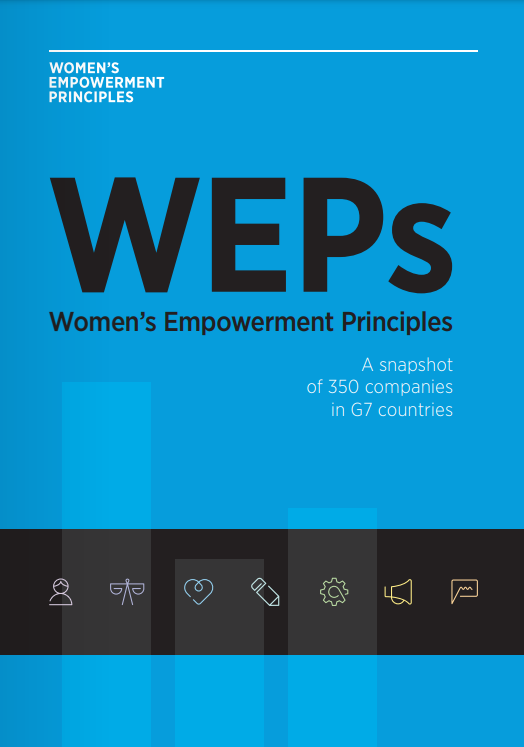 A snapshot of 350 companies in the G7

An enabling environment with strong multi-stakeholder interventions are key to achieving gender equality. This very notion is explored throughout this study, which offers insight on how the public and private sector interact to advance women’s economic empowerment in the world of work.
More specifically, this study: 1. Highlights G7 countries’ laws and policies impacting the lives of women; 2. Provides a snapshot of the status of WEPs implementation of the largest 350 companies in the G7; and 3. Illustrates that WEPs signatories generally perform better on gender equality than non-WEPs signatories. 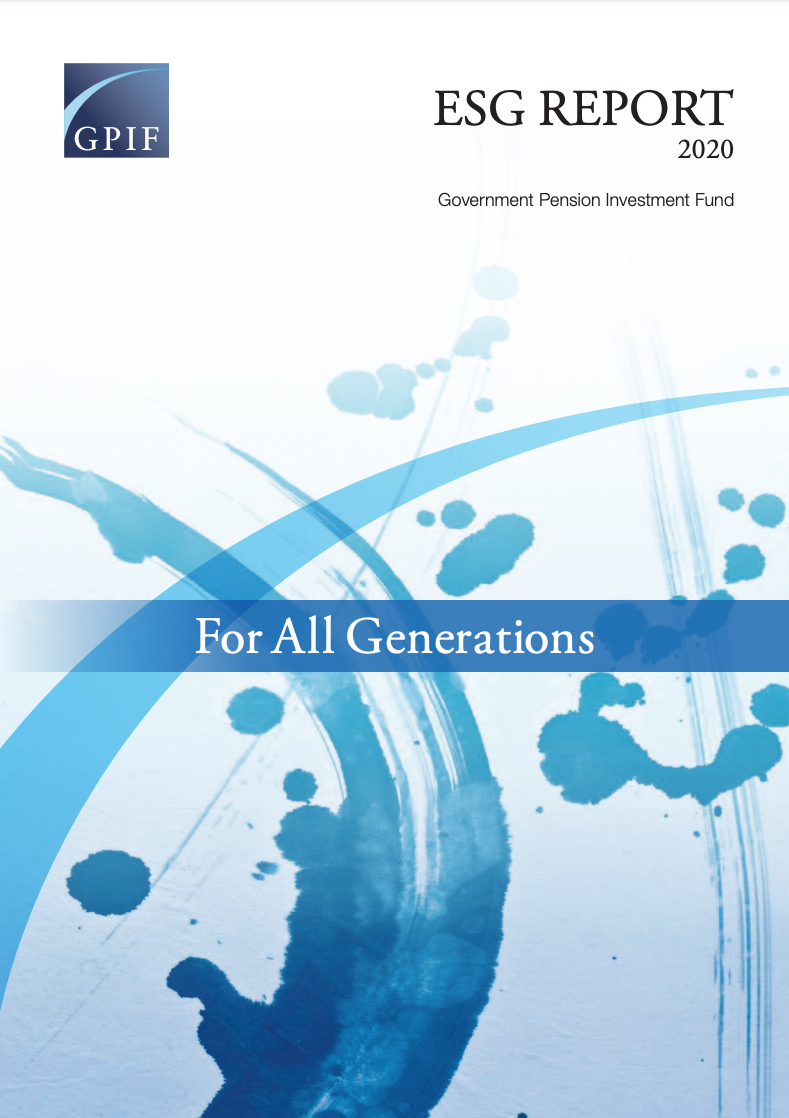 The reports includes the entire supply chain in the greenhouse gas emissions analysis; expands the analysis to include not only traditional asset classes but also alternative asset classes such as gender equality; and provides an analysis of inter-industry transfer of opportunities and risks accompanying the transition to a low-carbon society. 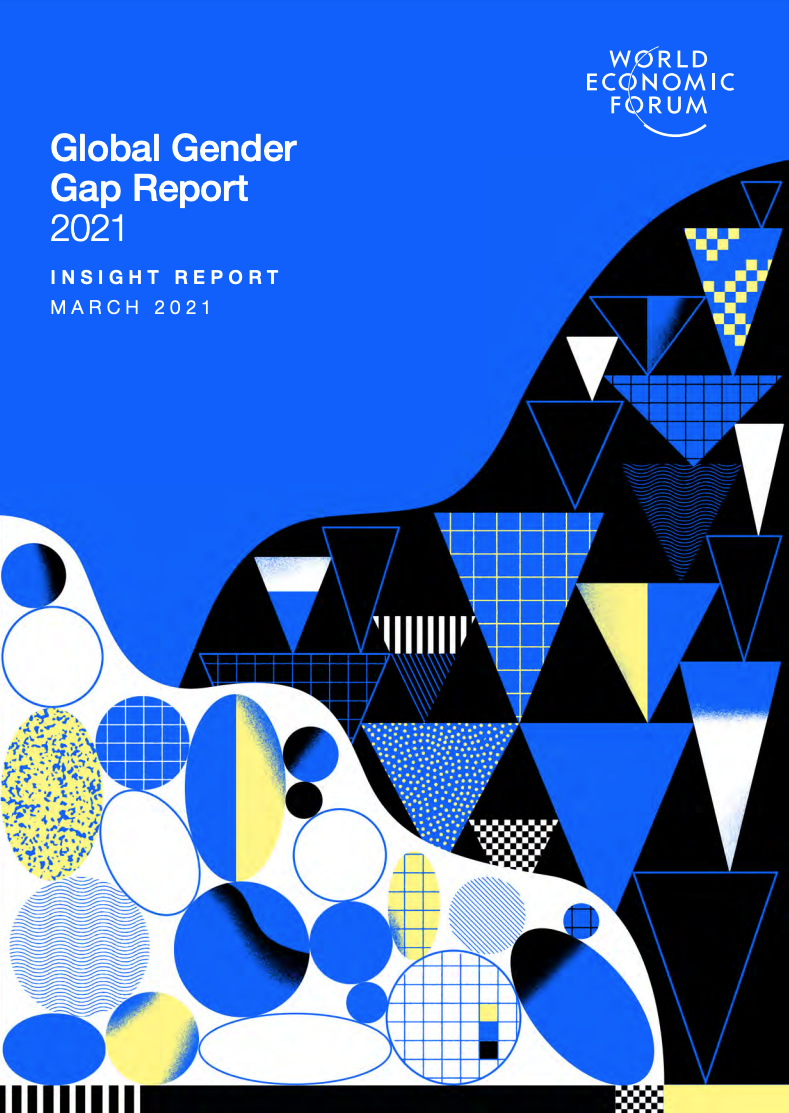 Another generation of women will have to wait for gender parity, according to the World Economic Forum’s Global Gender Gap Report 2021. As the impact of the COVID-19 pandemic continues to be felt, closing the global gender gap has increased by a generation from 99.5 years to 135.6 years. 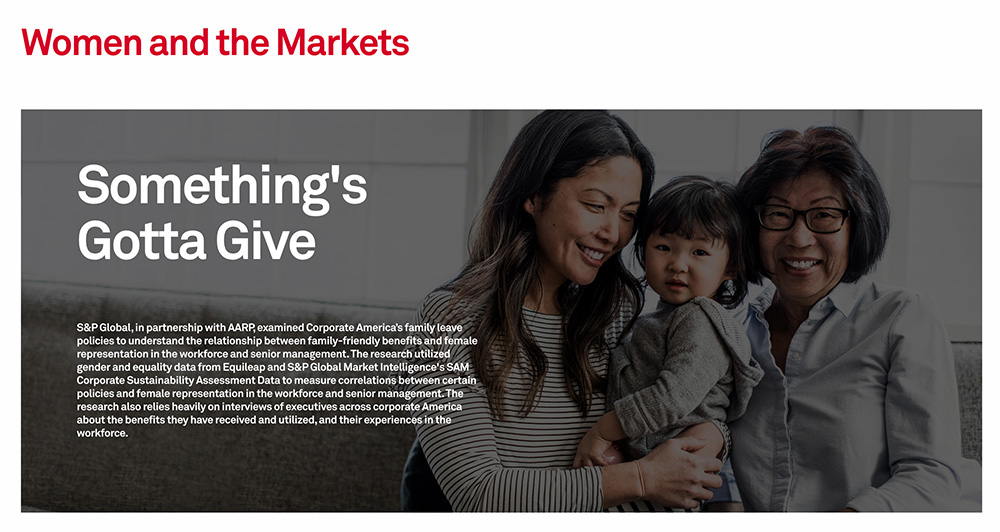 Women and the Markets

S&P Global, in partnership with AARP, examined Corporate America’s family leave policies to understand the relationship between family-friendly benefits and female representation in the workforce and senior management. The research is based on the results of a survey of 1,573 individuals who work for a firm with more than 1,000 employees and gender equality data from Equileap. 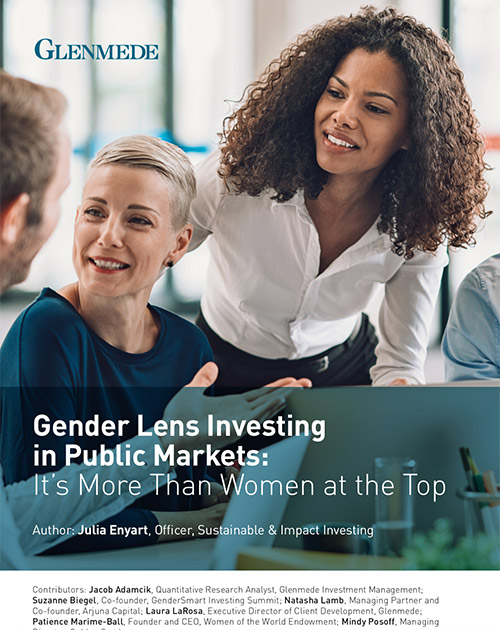 Gender Lens Investing in Public Markets: It’s More Than Women at the Top

With a global public market size of $3.4 billion as of 2019, gender lens investing has moved beyond an examination of how many women are serving at the highest echelons of a company. The research used Equileap’s data on companies in the Russell 1000 (2014-2020) to identify the relationship between gender equity factors and performance. One conclusion is that, on a sector-neutral basis, companies in the top quintile of Equileap’s Category A (Gender Balance in Leadership and Workforce) experienced on average greater return and less risk than companies in the bottom quintile. 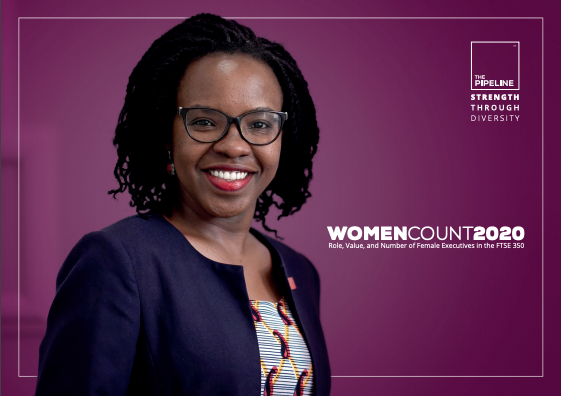 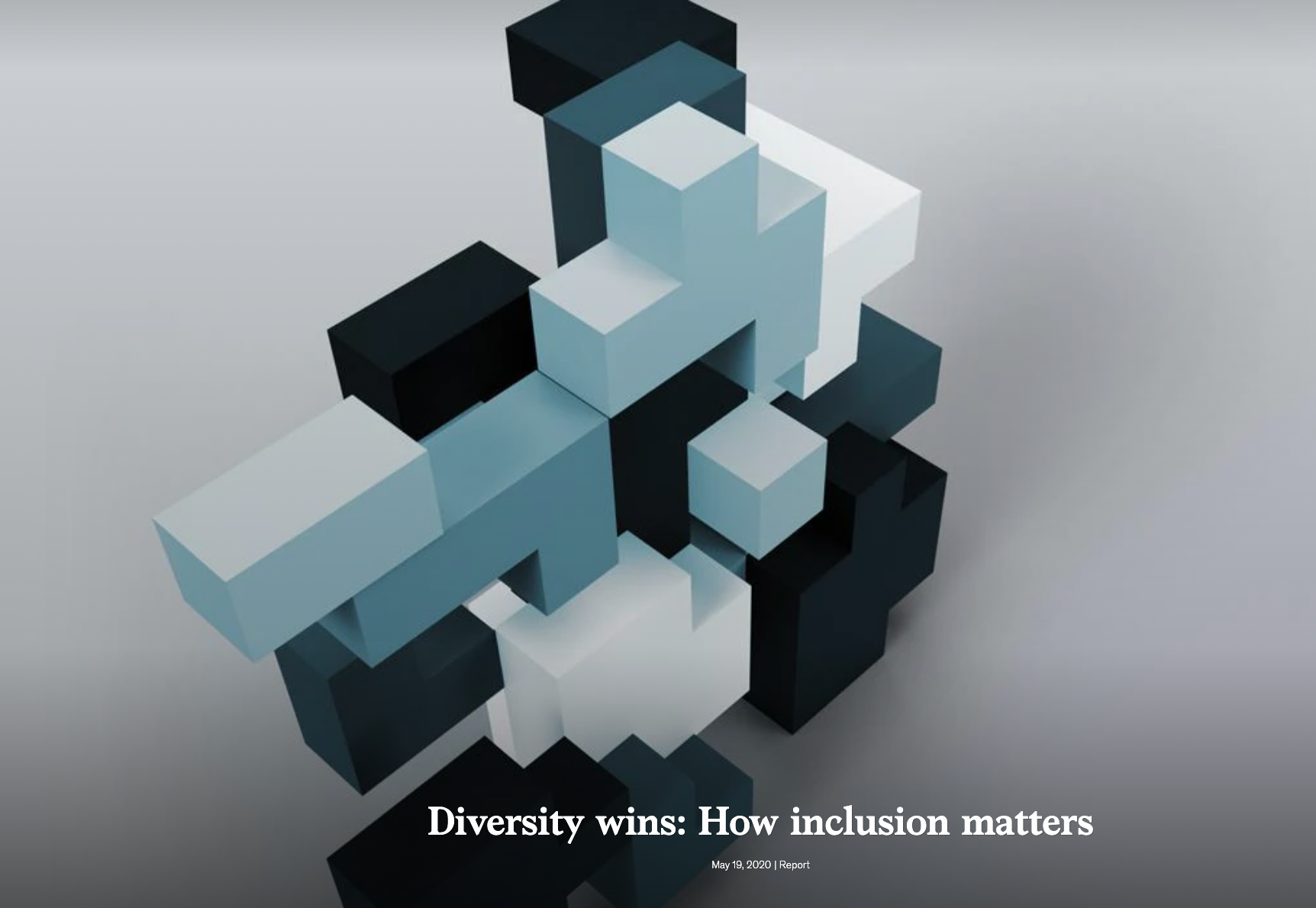 Our latest report shows not only that the business case remains robust but also that the relationship between diversity on executive teams and the likelihood of financial outperformance has strengthened over time. These findings emerge from our largest data set so far, encompassing 15 countries and more than 1,000 large companies.

According to a new analysis by Veris Wealth Partners, asset growth in GLI products accelerated and totaled $3.4 billion as of June 30, 2019. In our 2018 GLI analysis, we reported $2.4 billion invested in GLI products. As important, the size of the funds continued to grow, reflecting their growing popularity among individual and institutional investors. There were 10 investment products with over $100 million and six with over $250 million as of June 30, 2019. 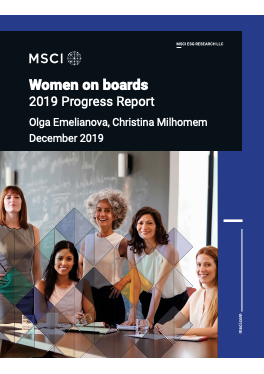 The number of companies with majority female boards doubled in 2019 compared with 2018. Yet these 22 firms accounted for fewer than 1% of the constituents of the MSCI ACWI Index as of October 30, 2019; 98.7% of the boards remained male-dominated. 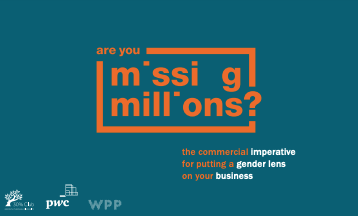 Are you missing millions? The commercial imperative for putting a gender lens on your business

The report is produced by the 30% Club in conjunction with PwC, with support from WPP and case studies from global and FTSE100 diversity champions including Diageo, GSK, HSBC, Mastercard, PwC, Unilever and Vodafone. It aims to inspire and support businesses to seek commercial benefit by taking a more systematic and enterprise-wide approach to gender, far beyond the traditional focus within HR. 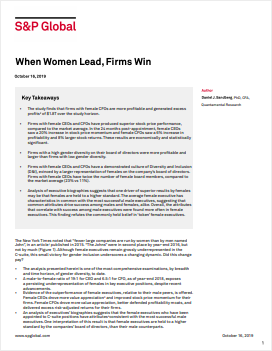 The study finds that firms with female CFOs are more profitable and generated excess profits of $1.8T over the study horizon. It also found that firms with female CEOs and CFOs have produced superior stock price performance, compared to the market average. In the 24 months post-appointment,female CEOs saw a 20% increase in stock price momentum and female CFOs saw a 6% increase in profitability and 8% larger stock returns. These results are economically and statistically significant. 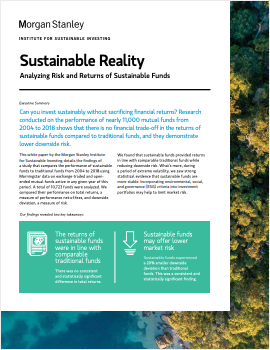 Can you invest sustainably without sacrificing financial returns? Research conducted on the performance of nearly 11,000 mutual funds from 2004 to 2018 shows that there’s no financial trade-off in the returns of sustainable funds compared to traditional funds, and they demonstrate lower downside risk. 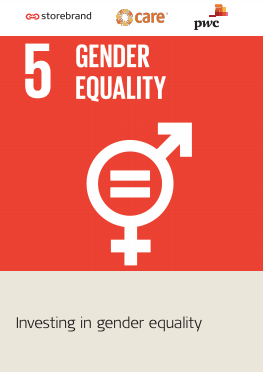 The report, prepared by PwC Norway and commissioned by Care and Storebrand, looks at the connection between gender diversity and corporate performance. The review of existing relevant literature finds that increasing female labour market participation can lead to many positive effects, such as increased economic growth, increased productivity and an increased economic resilience. It also finds that more diverse leadership can lead to increases in profitability. 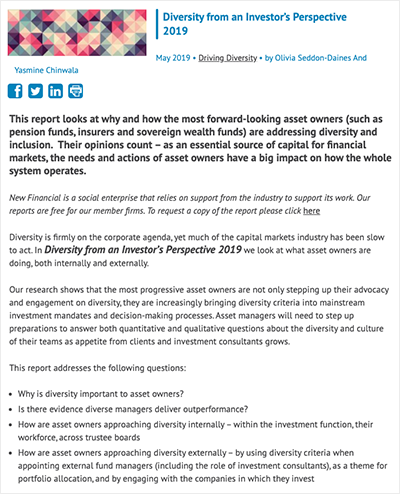 Diversity from an Investor’s Perspective

This report looks at why and how the most forward-looking asset owners (such as pension funds, insurers and sovereign wealth funds) are addressing diversity and inclusion. Their opinions count – as an essential source of capital for financial markets, the needs and actions of asset owners have a big impact on how the whole system operates. 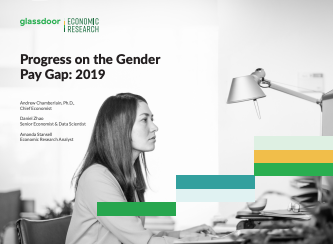 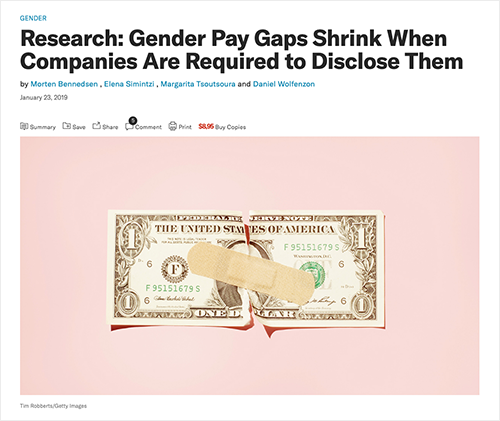 Research: Gender Pay Gaps Shrink When Companies Are Required to Disclose Them

The study’s results suggest that disclosing disparities in gender pay does in fact narrow the gender wage gap. It also can increase the number of women being hired, indicating that the supply pool of female employees increases as gender pay transparency improves. It can increase the number of female employees being promoted from the bottom of the hierarchy to more senior positions. And it can lower companies’ overall wage bills, largely by slowing down the growth of male wages. 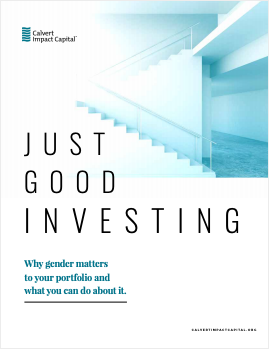 Just Good Investing: Why gender matters to your portfolio and what you can do about it

Whether we acknowledge it or not, gender is a major determinant of life outcomes around the world. On average, over 11 years, companies with higher percentage of Women in Leadership positions and Women in Board positions outperform companies with the lowest percentages. It’s not just the number of women that are important, it’s the ratio. Once a borrower exceeds 33% of Women in Leadership, we observe a more significant increase in financial performance.

Equileap is the leading provider of data and insights on gender equality. Launched in 2016, the social enterprise aims to close the equality gap in the workplace.